Aside from earning $103.3 million during opening weekend in North America, being the highest grossing film directed by a woman, and earning 93% positive reviews on review site Rotten Tomatoes, Wonder Woman and its main character Diana Prince stand out for another reason.

Wonder Woman is joining my list of fictional-movie-and-television-characters-who-work-in-museums-or-have-art-history-degrees-which-only-tangentially-relate-to-the-main-narrative (phew, that’s a mouthful!).  As the movie begins, we see Diana entering a stunning office in The Louvre surrounded by ancient arms and armor, receiving an archival photograph.  It’s assumed that she is now part of their curatorial team, making her possibly the world’s only superhero art historian.

More interestingly, these backgrounds are mentioned as “throwaway” lines or occasional side plots and having little or nothing to do with the main narrative.  Yet, we real-life museum workers get excited and see it as an exciting nod to our profession.

Is it chosen because our profession is unknown and mysterious? 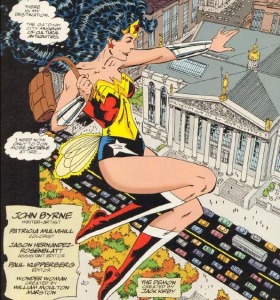 Held to a higher moral standard?

Are we just… cool?

For every line of dialogue that’s cut, why do these lines stay in?

How many more characters are also art historians and museologists but the dialogue gets cut before the final production?

There are, of course, also movies and television shows in which the main plot revolves around a museum or art historians:

But in each of these, the art history or museology plot is critical to the story. Then there are the movies about archaeologists and museologists who are actual real people doing real things, but I digress.

Going back to the original list of fictional-movie-and-television-characters-who-work-in-museums-or-have-art-history-degrees-which-only-tangentially-relate-to-the-main-narrative, my musings don’t have much of a conclusion as much as a wink back at the directors who wink at us.  We notice. We get excited. And I hope that by making our profession the everyday life of demigods, futuristic medical doctors, political operatives, and spies, art history and museum work maintain a positive reputation.